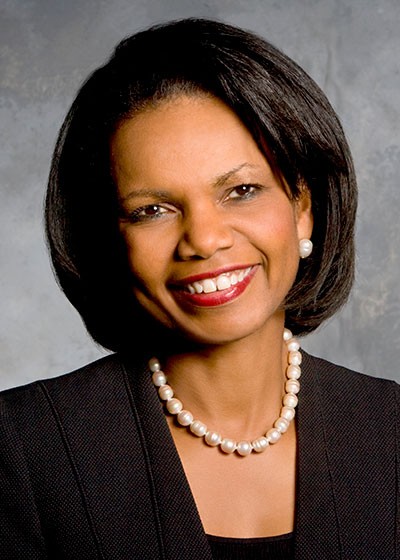 You are invited to join us for the inaugural Gallegly Center Speaker Series lecture featuring Dr. Condoleezza Rice.

Condoleezza Rice is currently the Denning Professor in Global Business and the Economy at the Stanford Graduate School of Business; the Thomas and Barbara Stephenson Senior Fellow on Public Policy at the Hoover Institution; and a professor of Political Science at Stanford University. She is also a founding partner of RiceHadleyGates, LLC.

From January 2005 to 2009, Rice served as the 66th Secretary of State of the United States, the second woman and first African American woman to hold the post. Rice also served as President George W. Bush’s Assistant to the President for National Security Affairs (National Security Advisor) from January 2001 to 2005, the first woman to hold the position.

She has authored and coauthored numerous books, including three bestsellers, Democracy: Stories from the Long Road to Freedom (2017); No Higher Honor: A Memoir of My Years in Washington (2011); and Extraordinary, Ordinary People: A Memoir of Family (2010). She also wrote Germany Unified and Europe Transformed: A Study in Statecraft (1995) with Philip Zelikow; The Gorbachev Era (1986) with Alexander Dallin; and Uncertain Allegiance: The Soviet Union and the Czechoslovak Army (1984).

About the Speaker Series

The purpose of the series is to brings renowned and noteworthy dignitaries, authors and experts who exemplify the idea of public service to Cal Lutheran to speak about public service and civic engagement.

About the Gallegly Center

The Gallegly Center for Public Service and Civic Engagement is a nonpartisan center for students seeking meaningful ways to engage and serve the community through a career in public service. As part of California Lutheran University’s Master of Public Policy and Administration program, the Gallegly Center will offer students a wide range of experiential learning opportunities at the local, state, and national levels creating a pathway to public service careers. Ultimately, the Gallegly Center will serve as an interdisciplinary forum for faculty, scholars, and students to redefine what it means to be civically engaged.

Proceeds will support the Gallegly Fellowship program. Seating is limited.